Group stage of the Champions League is kicking off in style, with several very interesting matches scheduled for the first round, so you should pay attention to our Chelsea vs Sevilla betting odds.

One of the most anticipated showdowns will happen in Group E, where Chelsea opens play against a tough Spanish team Sevilla in a direct meeting of the two main favourites to win the group. Given the importance of the match and the quality of the competition, it is not a surprise that fans around the world are eagerly anticipating the first meeting of those two teams and trying to guess what the score will be after 90 minutes.

To satisfy curiosity of the fans and provide some guidelines for smarter betting on this match, we prepared a brief Chelsea - Sevilla preview that will tell you all you need to know about this soccer spectacle. Armed with this information, every fan can make his own prediction regarding the eventual outcome of the match.

This game opens the play in a competitive group E of the Champions League, where Sevilla and Chelsea will have to contend with Krasnodar and Rennes for two tickets for the knockout phase.

Chelsea will be the host team in the first of two meetings against Sevilla, with the match scheduled for October 20th at the famous Stamford Bridge stadium in London, albeit without fans in the stands due to the ongoing epidemic.

For this reason, home field advantage may not be the decisive factor in this match and the visitors might take advantage of this state of affairs. Since all teams in the group are just starting out, winning three points against a top rival would obviously be huge for either club and would set a great tone for the rest of the campaign. At the same time, it’s still early in the competition and it’s difficult to evaluate how each team will look on the field against an elite opponent.

Who is going to win in Chelsea - Sevilla match? Place your bet at Unibet!

To better understand Chelsea vs Sevilla betting tips, it is necessary to take a closer look at the manpower of each club and their recent records.

Chelsea is universally regarded as one of the most capable teams in Europe, and it won the 2019 Europa League final. It has a deep roster of international players headlined by names like Jorginho, Kurt Zouma, Tammy Abraham and Christian Pulisic. The Blues did not waste their time during the transfer windows and spent over £200 million on the new players. Chelsea managed to secure the signings of Timo Werner, Hakim Ziyech, Kai Havertz, Thiago Silva, Edouard Mendy and Malang Sarr.

I think English football is very fast, faster than German football. And there are a lot of different styles. In the end, whether I get more chances to score will be down to Chelsea and how we play football. We want to play like a French team. We want to keep the ball and have different styles of football in our game, have a lot of possession and take different positions. - Timo Werner (Chelsea, Independent

On the other hand, Sevilla is a very strong team in its own right, one of the best Spanish representatives in the Champions League. The team features a combination of experienced Spanish players like Jesus Navas and Sergio Escudero, and high-profile foreigners like the old-new acquisition Ivan Rakitic or Luuk De Jong. It will be interesting to see which strategies the managers will deploy in order to maximize the strengths of their teams and win an important victory in London.

Both Teams To Score - Best odds

Judging by the Chelsea - Sevilla betting odds currently offered by the major sports books, the English team is viewed as the favourite to win, but the margin is not all that broad.

At Bet365, you can get an 2.00 bet on Chelsea to win this match, with most other sites including William Hill very close to this evaluation. Meanwhile, there are bets available for Sevilla to win in the range from 3.70 to 3.80, illustrating that visitors are clearly the underdogs but not without a punching chance. [bT]he probability of a draw is also relatively high, with odds from 3.40 to 3.65 offered by the various betting brands[/b].

While it’s possible that the odds will move slightly in the days until the match, the expectations are relatively firmly set at this point and Chelsea will have to live up to the hype in order not to disappoint the fans. Still, this could be a captivating match that isn’t decided until the last few minutes. While you're here, we encourage you to checking the PSG vs Manchester United betting odds to see if the Premier League side stands a chance against the French champions.

Every true football fan knows that broadcasts only make sense if they are live, so there is a lot of discussion about the best ways to watch the Chelsea vs Sevilla Champions League match.

If you are not lucky enough to have direct broadcasts on your local or cable TV, there is always the possibility to watch on the internet. There are many websites where you can catch the Chelsea – Sevilla live stream and stay up to date with action on the pitch.

Among other providers, betting sites often stream important matches so you should check whether this option is available at the site where you are regularly betting. No matter where you watch the match, make sure to follow the Chelsea vs Sevilla betting odds as there is a huge chance to win the money, as well as high potential for attractive football right from the starting whistle and all the way to the end.

Do you know who is going to score next in Chelsea - Sevilla match?
Join bet365 to place a bet!
comment ChelseaVsSevillaBettingOdds
Recommended articles: 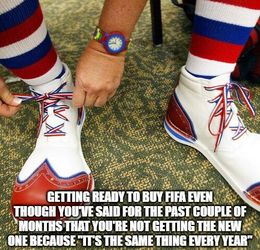 Load more fun
Play responsibly
Didn't find what you were looking for? Try our lucky star.
Chelsea vs Sevilla